It wasn’t until I was 30 years old that for the first time in my life, I did the things that many people do right after high school, or certainly right after college: I lived on my own and was responsible for supporting myself—paying my own rent, utilities, groceries, and all my living expenses, plus saving for the future.

You see, I’d done things kind of backwards from most people. Instead of graduating high school, then college, then meeting that special someone and getting married after being on one’s own for some time, I’d gotten married when I was 20 years old while still an undergraduate in college, and just a year out of living in my childhood home with my widowed mother. Fending for myself was something I had never done—I always had someone else who was there helping to foot the bill and helping me figure things out.

After getting married, for the next 10 years my husband and I were in and out of undergraduate and then graduate school programs, first one finishing and then the other, while one of us always worked. We had moved from our home town in North Dakota to Dallas, Texas, so that he could pursue graduate school and I would be working. My degree was in geology and luckily, I landed a job in the oil industry. But within 4 years, the industry went through a major downturn (this was the mid-1980s) and I did not survive the third round of layoffs at my company, which put a huge kink in our plans. When I couldn’t find another job (or even get an interview!), I was back to school myself, pursuing a master’s degree. From that time forward, being broke was a constant for us—juggling school and part-time jobs and trying to pay bills with student loans. Over the course of those 10 years, we took only one “real” vacation (by real, I mean it wasn’t a visit to see family). Ultimately, the toll all of this took on us was greater than our marriage could sustain. Thus, at 30 years old, I found myself getting a divorce, moving to Houston, and realizing that I would be managing on my own for the first time ever. And so it happened that Houston was the place where I finally came into my own as an individual—but not without a few bumps in the road.

I was freshly minted with my MS in geology and in my first job after completing that degree. I was starting that job in a huge new city where I had never lived, far away from my family (they were all in Seattle) and all my friends (they were up in Dallas, 5 hours away). I had made the trip from Seattle to Houston to take the job. Houston, the fourth largest city in America, where I knew no one, and had no support system whatsoever. I read much later about the psychologists Dr. Thomas H. Holmes and Dr. Richard H. Rahe and their famous Stress Scale—the numerical stress value given to various life events, on a scale of 11 to 100 (with the death of a spouse being 100, and getting a traffic ticket being 11) and the relative effects they can have on a person’s mental and physical well being. I chuckled as I read through that article, and ticked through my first year in Houston. There I was, getting divorced (73), starting a new job (29), and moving to a new city (20), halfway across the country, by myself (18), all at the same time. Not to mention that I had a death in the family (63), a brother who died of lung cancer in the year previously. In the same year leading up to all this, my husband and I had an increase in the number of marital arguments (35), I was finishing grad school (26), had outstanding achievement (28), trouble with in-laws (29), a spouse fired from work (47) and all the financial hardships that go along with that, and another cross-country move (20). By anyone’s measure, my stress level was off the charts. By Holmes and Rahe’s scale, that added up to a whopping 388 in 1-year’s time—anything higher than 300 gave me an 80% chance or better that I would fall ill or have some kind of accident. Granted, some of these stressors were out of my control but, in hindsight, most of it I did to myself.

I recently listened to the audiobook Hillbilly Elegy: A Memoir of a Family and Culture in Crisis by J. D. Vance, and one line in that book really hit me. He discusses in great detail about his unstable childhood and unhappy circumstances growing up, and how people in those circumstances are often desperate to escape to a better life. How in their pain and haste to escape, they often make the wrong choices. He said, “in reeling toward the exit, they often choose the wrong door.” This statement really resonated with me and made me think of this period of my life in Houston and the months leading up to it. How many of my decisions created a lot of unnecessary pain for myself and for others.

I chose the extremely difficult path of coming to Houston alone and starting my life over alone, which at the time felt like the only choice I had. You have to be in a lot of pain to make a choice like that, and of course with the wisdom of 30 years later, I can visualize many ways in which I could have made it easier on myself and on the others whose lives were being affected. It was a trial by fire like I’d never experienced before. What I remember most about that first year was a crushing loneliness that felt like it would suffocate me most days. I made it through this time period only through the strong bonds of newly formed friendships at work, at the Sierra Club, and through an explosion of new interests in a city that opened up the world to me.

I may have crash-landed into Houston in 1988—a messed up and heartbroken 30-year old who was scared out of her wits. But eventually life’s bumps evened out for me and I began a love affair with Houston that continues to this day. I embraced the city’s arts, entertainments, restaurants, festivals, cycling clubs, the Sierra Club, and proximity to the Gulf Coast. I became enamored with the Houston Ballet, and I have an exciting story written about the ballet here! For several years I worked as a volunteer at the start gate for the Houston Marathon, because I had friends who were running in the marathon and I went along for support. It was so inspiring to me, watching all that effort and the accomplishment of all those people, that for two years after that I participated in the MS-150, a bicycle ride that ran from Houston to Austin. This was a giant group fund raiser with many thousands of riders participating, and we raised more than $1 million for multiple sclerosis in the last year I rode along. In other years, for 3 years running in 1997, 1998, and 1999, the City and the mayor sponsored the “Power of Houston,” a week-long, city-wide celebration of Houston that was capped with the largest laser and fireworks celebrations the world had ever seen at that time. It was the mayor’s party and took place in September, and it was the most fantastic fireworks display I have ever seen. Sprinkled amongst some of these big, memorable events were just the regular, fun things that happened on a yearly basis and were the things I never missed: the twice-a-year Bayou City Arts Festival; the can’t-miss-it gardening sales: Houston Garden Club’s Bulb Mart in the fall and Mercer Arboretum’s March Mart in the spring; the annual trek to see the bluebonnets and the baby alligators in the spring; or taking advantage of the opportunity to hear prominent speakers who came to town. I have heard Gloria Steinem, Jane Goodall, Madeleine Albright, Maeve Leakey, Neil deGrasse Tyson, a Holocaust survivor. All the world-class museum exhibits come to Houston! I once crossed paths with the Dalai Lama at the airport! 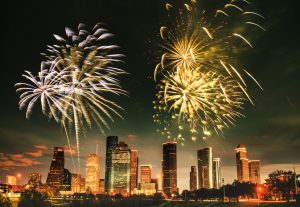 Importantly, Houston being the capital of the oil industry, it was the place where I started my own business in 1994 and I’m still self-employed to this day. I’m not a millionaire by any stretch of the imagination, but my clients are here and my reputation was built here. My volunteer efforts with and for my colleagues have also been here. All of that means something to me.

People ask me all the time: “How could you possibly live in Houston, with all that traffic?! And all that heat and humidity?” And I think, “Well, I work from home. I’m not in the traffic. And that’s what A/C is for.” But mostly I think about all of the above, and how my life has been enriched by living here. I just couldn’t imagine it any other way.