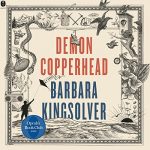 Demon Copperhead tells the raw, emotional tale of a 10-year-old boy’s heartbreaking childhood and adolescence scarred by drug addiction, sudden death, child abuse, and being bounced around through the foster system in a small Virginia town. Damon Fields is the boy’s real name; “Demon Copperhead” becomes his nickname, and it sticks.

The town is in Lee County, in southwest Virginia, where everybody knows your name and knows your business. Demon’s mother, who has been in and out of drug rehab, dies of an overdose when he is 11 years old, but not before marrying a lowlife named Stoner who upends the very fabric of their life together. The loving bond that Demon and his mother once shared is shattered as the controlling and sadistic side of Stoner surfaces. Soon, both mother and son are terrified of him. Life as they knew it is over. Accidental or not, Demon’s mother overdoses and permanently escapes the hell she has created, leaving Demon to face life on his own. It’s only at this juncture that Stoner loses further interest in torturing the boy.

With no relatives to take him in, Demon begins the awful slog from foster situation to foster situation, each one worse than the last. Foster care is not only just a money-making scheme for a lot of foster parents, but it’s easy access to free child labor for whatever business ventures they may be involved in. The book gave an eye-opening account of how foster parents cheat and lie to the system, giving “tours” of the bedroom where the new foster child will be sleeping, only to set them up in the garage or the laundry room after the social worker leaves. In Demon’s case, it was the dog’s room, where one foster family used to breed dogs in a previous failed business venture.

It’s in foster care that he himself gets introduced to illegal and prescription drugs, which are freely shared by the other kids as a way to escape their miserable existences. As much as Demon despised what killed his own mother, he easily slips into partaking with his new buddies—a little here, a little there. It wasn’t going to hurt anything.

His final foster placement, in high school, was the dream every foster child hoped for. A mansion by anyone’s standards and who lived there but the coach of the high school football team! This was a decent man raising a decent family who treated him well—a first. His wife had died of cancer so he drank a bit too much was his only vice. He had a daughter a few years older than Demon who everyone called Angus. Her real name was Agnes but again, some kids teased her when she was young and turned it around to Angus and…it stuck.

Coach saw potential in Demon as far as football goes and a star was born. All of a sudden, Demon had a purpose and a calling and a life. It completely turned his life around in a way he’d never imagined. The girls were falling all over him, another turnaround. He shot right from junior varsity to varsity in one year; he was on fire. Until a fatal tackle messed up a knee.

They gave him Lortab in the hospital to deal with the pain. This was hydrocodone, or what we now know as Vicodin. He was terrified about the talk of knee surgery and even more terrified when he met the doctor who would be doing the surgery. Then weeks to wait for an X-ray and an MRI. The painkillers were only meant as a stopgap, but “every four hours I’d wake up, empty the tanks if needed, goddamn the whole mess to hell, and cruise away again, thank you Lortab. Doc said to double them up, and set an alarm and keep that good stuff in my blood around the clock.” The weeks turned into months and the doctors continued to refill the prescriptions. At 15 years old, he gets hooked.

With his football career over, Demon drops out of high school and falls in love with a girl named Dori, who is taking care of her disabled father. Dori introduces him to a wonder drug named Fentanyl, the ultimate painkiller, which she steals from her father’s stash of drugs.

Barbara Kingsolver’s ultimate purpose in writing this book was to show how the manufacturers and sellers of opioids used places like small towns in Appalachia to get the public hooked on their drugs. She uses the case first of Demon’s mother, then Demon himself, who knew nothing of the addictive quality of the drugs he was taking and the dangerous game the doctors were playing, to show how a large swath of the American public were played by those whose main motive was profits. She is clearly targeting Purdue Pharma, but also our broken healthcare system. She did her research for Demon’s spiral into addiction and learned how to write what it felt like to be dopesick, the mechanics of the drugs, by interviewing recovering addicts, and wove their stories into Demon’s. All of her informants started out with a legal prescription and were following doctor’s orders, she said.

How Kingsolver managed to channel an adolescent boy’s psyche to write this book is anyone’s guess, but what she accomplished here is a true marvel. Every sentence is steeped in boyish slang, thought processes, attitudes, and reasoning. Taking such serious subjects as poverty, drug addiction, and exploitation of the public and yet writing such a humorous book from the perspective of a young boy is a skill that few writers possess. Some of the funniest passages were the back-and-forths between the teenagers themselves, how they abuse each other and give each other shit; I swear she’d been doing some serious eavesdropping. I highly recommend this book. You will not only learn a lot, but you will also truly enjoy yourself in the process.