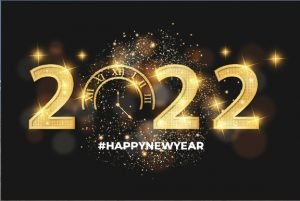 Many people use New Year’s Day to make resolutions, or lists of things to do in the coming year. They may use the day to take stock of the previous year and think about what worked for them, what didn’t, and try to make adjustments going forward. I’m on several mailing lists these days, and I’m getting bombarded with a lot of things like “10 ways to be more mindful in 2022.”

Frankly, I stopped doing all of that a long time ago. There didn’t seem to be anything special about New Year’s Day that made a new habit, or a new diet, or a new financial plan, or a new gym membership stick around any longer than any other day. Either I was going to make a change or I wasn’t, and it being the first of the year didn’t really make a difference for me.

But one thing I did start to do was plan for something special on New Year’s Day, because I do like celebrations, even if they are quiet ones. To me, there is something very special about a holiday that the entire world celebrates together, all at the same time (which of course includes New Year’s Eve).

For example, when I lived down in Rockport, Texas, I started taking my two Chihuahua pups Rhoda and Frida down to an isolated stretch of beach and let them run. I found a particular place I really liked. I usually went to Mustang Island State Park, which was about an hour’s drive and a ferry ride away from my house. On New Year’s Day the beach park was usually cold and deserted, so we had the place practically to ourselves.

After I parked and got situated, I would start walking with the dogs; eventually I would let them off their leashes. This amazing thing would always happen. First, they would just trot ahead of me a little ways, and then they would break into a run when they realized they were free. Frida would start to run in huge, wide circles in pure unadulterated joy on that open expanse of beach. I’ve never seen her happier than on those days. Frida was very fast, my little miniature greyhound. Rhoda, who was her shorter and squatter sister, could never quite keep up with her—she would chase after her for a few circles, then when she realized she couldn’t catch her, she would cheat and cut across the circle, tackling her at the halfway point! They’d roll into a ball and then Frida would be off again, with Rhoda desperately chasing behind. I’d laugh until I cried. I only regret I don’t have video of this.

I let them run like this until they were panting hard, their tongues hanging low, and they were full of sand and seaweed, eventually trotting back to me, signaling that they were spent. In the many consecutive years of spending that day out there, I was cautioned sometimes by the park rangers driving by, that “your dogs really should be on leashes,” but mostly they just smiled as they watched them themselves.

Both Frida and Rhoda are gone now, and I moved to Houston the same year as the last one passed. With the chaos of moving twice and the disruption of COVID on all our lives, I have yet to replace that sweet memory and tradition with a new one, now that I’m in Houston. Whatever it will be, it most certainly will be something out in nature, as that’s where my best memories and celebrations of life have been.

Wishing you moments of pure, unadulterated joy and an abundance of life in the New Year! If you have found a unique and wonderful way to celebrate the new year, please share it in the comments below.