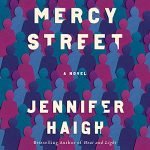 Mercy Street is a novel about a women’s clinic in Boston, Massachusetts. The real name of the clinic, “Women’s Options,” hangs above the door, but everyone calls it “Mercy Street.” Here is where you go for contraceptives, well-woman visits, STD testing, and yes, abortion counseling and services. The focus of the story is Claudia Birch, a woman in her 40s who is the access coordinator of the clinic: she runs the hotline and is the counselor who interviews the end-members who come in the door—teenagers who are young enough that they need parental consent, and those who are far enough along in their pregnancies that they are close to the legal limit for abortion in Massachusetts (24 weeks).

The author gained the necessary experience for writing this book by once being a volunteer at a similar women’s clinic in Boston, answering the clinic’s hotline whenever girls or women would initially call in for information or to book an appointment (refer to The NY Times Book Review Podcast #386, Feb. 18, 2022). This experience comes through in raw and realistic detail as she recounts random conversations from those panicked voices:

“Her first call was a Pill question. As the caller spoke, Claudia took the following notes: Started pack three days late. Missed two white, took week two. Missed one pink. Only green left. She had long since mastered the Pill question, having heard every possible variation: started late, started early, vomited up a white one, took two pink ones by mistake. She could answer a Pill question in under a minute, in English, Spanish, or Haitian Creole.”

Claudia’s backstory, which includes having a teenage single mother of her own, plus poverty and foster children who helped pay the bills, helps explain why she chose this particular line of work. Her compassion for women in impossible situations (“If my ex-husband finds out I’m pregnant, he will come here and shoot my kids.”) is endless and judgment-free. She hasn’t walked a mile in their shoes. So, so many were living in domestic violence situations. Unlike the stereotype, the majority were not unwed teenagers. Most were in their mid- to late-20s, many were married and already had children, some were in their 30s to 40s, very accomplished professional women. But one thing they all have in common: when they arrive, they are in crisis. Their lives are “like a burning building with a fire on every floor. Which fire do you put out first?”

Even simply getting into the clinic so you could report to work was stressful. Boston, the “most Catholic city in America,” had eliminated the law where protestors had to stay so many feet away from abortion clinic front doors. Now they could crowd the door all they wanted. So whether you were on staff or a patient, you had to run the gauntlet—you were harassed from the moment you parked your car until you squeezed your way through the crowd and into the door. They would get in your face and shout “Mother don’t kill your baby!” “Abortion causes breast cancer!” and “You’re doing the devil’s work!”

In addition to Claudia, three men are profiled in the novel, who add a lot of color and balance to the book. Two are adamant anti-abortionists on a mission to shut down places like Mercy Street. Victor is a Vietnam veteran and an ex-long-haul trucker, but first and foremost a white supremacist. He has some pretty 18th-century ideas about the role and place for women in society. He’s built a “Hall of Shame” web site, exposing abortion clinics and the women who patronize them. He has hired Anthony, a devout Catholic, to hang around outside clinics such as Mercy Street and surreptitiously photograph women going in to get abortions. (This, of course, is illegal.) Anthony sends the photos to Victor and up on the web site these photos go. Of course, neither Anthony nor Victor really know who they are photographing and what their business really is at these various clinics.

The third gentleman is Timmy, a friend of Claudia’s who also happens to be everyone’s weed dealer. Timmy, who smokes weed all day, every day, 24/7, provides a lot of comic relief in the middle of otherwise intense and sobering subject matter. His primary worry in life is what he’s going to do when, not if, marijuana becomes legalized across the country and puts people like him out of business. I liked Timmy a lot.

Claudia recounts a news item that appeared in the Boston Globe a few years earlier: a jogger on Deer Island had discovered a pile of debris washed up on the beach—a black plastic trash bag with a tiny hand sticking out of it. It was the drowned body of a little girl, about 2 years old. Her face was bloated beyond recognition. She wore a disposable diaper and pink cotton leggings printed with tiny hearts. She became known as Baby Doe in the press. The child was well nourished and well cared for, with no signs of abuse. Yet no one reported a child missing. How was that even possible?

Through a police tip line, the perpetrators were eventually caught—a man was seen tossing something over a bridge while a woman watched from the passenger seat of a pickup truck. The mother and her boyfriend; the mother had former arrests for possession and prostitution, and another child previously removed from her care.

Claudia rifled through old case files, and thought back to the women she’d seen at the clinic in the past few years—the drug-addicted women who didn’t come back for their final appointments. The woman who showed up, 4 days past the 24-week limit, who she had to turn away. Could it have been one of them? What happened to those women? What happened to those babies?

Claudia thought of the protesters gathered outside on Mercy Street. Preventing abortion was all they cared about; once that moral victory was accomplished, their work was done. Once that baby was born, mother and child were on. their. own. The idea that that mother had to be supported, that that baby needed checking on…none of that was their concern.

“What made a person a person? Her mind and her memories, all that she had done and felt and known and created, thought and wondered and seen and understood. A fetus had no thoughts or memories; it had made nothing, understood nothing. And yet, this mute, unthinking knot of tissue—alive, yes, but unformed, unconscious, incapable of tenderness or reasoning or even laughter—was the life that mattered. The woman carrying it, the complex creature formed by twenty or thirty years of living in the world, was simply the means of production. Her feelings about the matter, her particular ideas and needs and desires, didn’t matter at all. A fetus was living tissue, no question. But it was not a person. A fetus, at most, was raw material. The woman carrying it could, if she wished, make it into a person. But what was the point of making yet another person, when the woman herself—a person who already existed—counted for so little?”

No matter which side you fall on the issue of abortion, this is an important book to read. In the US, about one in four women will have an abortion, but most never admit to it. That’s a staggering statistic, yet for women who have not had an abortion or don’t know anyone who has, they know very little about it or the impact it can have on women’s lives. Because of the extreme climate of secrecy around this issue, the average person knows very little about this experience. To quote Haigh from her podcast, “If you’re going to hold a very strong opinion on something, you should at least know a little about the subject. About why women make that choice.”