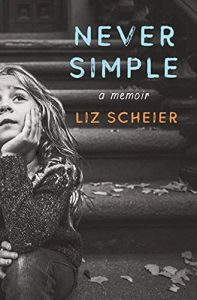 Liz Scheier learns in her freshman year of college that she doesn’t have a birth certificate. No, it’s not a simple matter of the original has been lost somewhere. Her mother confesses to her that she never filed a record of her birth. When Liz asks her mother why, she replies, “Well, I was married when you were born. But not to your father.” The memoir Never Simple is a story of “digging out the biggest lie I was ever told.”

Up until Liz was about 18 years old, she’d been told by her mother Judith that her pregnancy was the result of a whirlwind romance and marriage between herself and her father. Then, he was tragically killed in a car accident shortly after the wedding. Her grief was so total that she burned all photos, including the ones from the wedding, so no memorabilia existed. As it turned out, this story was total bullshit. Even the name she gave her father was made up. And it gets worse.

Liz had been entered into the New York City (Manhattan!) school system with a fake social security number. This was in the 1970s and 80s! How that slipped past everyone for almost two decades boggles the mind. Her mother had some vague early career “working as a lawyer” when Liz was young, but for the last ~30 years of her life was unemployed, yet somehow managed to live in Manhattan and raise Liz as a single mother, obsessing over the minutia of Liz’s life, school work, friends, boyfriends, etc. With nothing but Liz to occupy her, she became the control-freak helicopter mother from Hell.

Things got so bad between mother and daughter that Liz once attempted suicide by swallowing an entire medicine cabinet full of pills. Upon returning home from the hospital, Liz found that her mother had removed her bedroom door from the hinges, so now there was no way she could hide anything from her.

A form of mental illness had gotten a firm grip on Judith, eventually getting a diagnosis late in the book. Liz, older now and married, starts to have a few “aha” moments of clarity. As her mother continues her downward spiral, Liz realizes she may become a danger to her own children, and a period of estrangement and eviction eventually lands Judith in a homeless shelter.

Liz’s quest to find out who her real father was and what really happened to him, brings her up against people who are as eager to bury the past as her mother was. That, coupled with her mother’s increasing inability to live in the real world, must have made her feel like she was the only sane person in the room at times.

As heartbreaking as this story is, I was impressed at the author’s resiliency and grace in being able to forgive her mother, and yes, still love her mother despite everything. She appeared to come to a place of peace at the end of the book, and considering where she started and what she went through, that is saying something. A lot of powerful life lessons here.