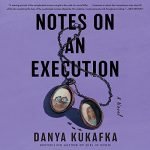 Notes on an Execution had such an eerie, true-to-life feeling for me that at one point as I was listening to the audiobook, I had to stop and double-check what I’d purchased: was this fiction or nonfiction? Because it’s been a long, long time since I’ve listened to a book where the narrative was so riveting that I would literally stop what I was doing to hear what would come next. I hope someday that I can achieve this level of compelling, heartstopping writing.

Ansel Packer is a serial killer on Texas death row who has killed four women. He killed three teenagers in New York State when he was just 17 years old; the fourth is Jenny, his estranged wife, who he killed 20 years later in Texas. The book swings between two timelines: counting down the final 12 hours of Ansel’s life in prison, and telling the story of Ansel’s earlier life, the background that brought him to this moment.

Ansel’s early childhood was as grim as it gets: he was born in a barn with only his mother and father in attendance. His father puts locks on all the food in the house, doling it out as they “earn” their keep. This and other extreme cruelties and abuses build to a crescendo, which his mother, Lavender, is too young, too uneducated, and too powerless to fight. After the birth of her second son, a severe case of post-partum depression keeps her still in bed 6 weeks later, weak and unable to eat. Her husband, out of patience, explodes in a rage that he takes out on her and 4-year-old Ansel, while he is holding his infant brother. Lavender, fearing for her life and the lives of her children, devises an escape that saves her life and her children’s lives, but it means she will never see her children again and they will spend the rest of their childhood in foster care.

The book follows Lavender throughout the rest of her adult life as she processes this heartbreak and trauma of abandoning her children, of never knowing what became of them. We follow her as she drifts from one community to another in California, rootless, seeking solace and healing, before finally making headway into finding information about her children.

In addition to telling Ansel’s and Lavender’s story, we also learn about two other women who are deeply affected by Ansel. One is Saffy (Saffron), who met Ansel in a group foster home as an 11 year old, and who grew up to be a police detective. She also happens to know one of the young girls killed by Ansel and suspects him for decades, but doesn’t have the proof. We see her in action as she bides her time, watching and waiting.

The third woman is Hazel, the twin sister of Jenny, the estranged wife murdered by Ansel. We see her navigate life first with her twin sister and their typical sibling rivalries, then try to manage without her. In the moments before Jenny’s funeral, she describes how, “As her mother comes closer, Hazel feels a mild suffocation. It could be the humidity or that ill-fitting suit. Or the thing her mother’s eyes do when they first catch sight of Hazel: they snag, widen, a brief flicker of hope that cools into disappointment. In that bottomless millisecond, her mother sees two daughters. Hazel is always the wrong one.”

Saffy had once interviewed Jenny, early on, while she was still engaged to Ansel. Just trying to learn Ansel’s whereabouts. When she told Jenny that the inquiry had to do with a series of homicides, Jenny shut down the conversation immediately, saying that Ansel couldn’t possibly be implicated in something like that. Saffy realized later that Jenny had something that seemed to be universal in women: “The ask for suffering. It was the scariest thing about being a woman. It was hard-wired, ageless. The part that knew you could have the good without the bad, but it wouldn’t be nearly as exquisite.”

The Polunsky Unit in Livingston, Texas; the Walls Unit in Huntsville, Texas…these are facilities within the Texas State Penitentiary system. Having lived in Texas for more than 40 years and having watched the news regarding death row and the steady execution of Texas inmates, these are familiar places just north of Houston. Understandably, it was a jolt to my senses to repeatedly hear their mention in this audiobook. Another reason I had to check myself: this was fiction, right? But the author did such an outstanding job of making the surreal seem real. Of weaving the lives of these people together, and even, in the end, imagining what the futures of these women might have been, had they not been interrupted by a man such as Ansel.

So even though the basis of this book is about a murderer facing execution, the murders do not take center stage. They are a side show. These women are the story, how their lives were changed, how they adapted, and how they might have been. The living are the story.