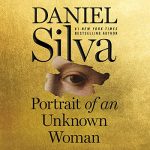 I had the good fortune to hear Daniel Silva speak in Houston earlier this summer while on his book tour for Portrait of an Unknown Woman. It was such a rare opportunity to see someone in person when you’ve read all his books and have formed an impression of who they might be. He said it was such a pleasure to see COVID restrictions coming to an end so that he could start book tours again, and see auditoriums filled with people again. He said the thing he missed the most about it was the book-signing line: that fleeting chance to meet one on one with readers of his books, and have those brief conversations. That was really nice to hear. It was also nice to come away with a signed copy of his book.

This latest book brings back his Israeli intelligence expert Gabriel Allon, who has a cover job as a renowned art restorer. Gabriel has now officially retired from his job as an Israeli spy and is living with his wife Chiara and two children in Venice. Together they run (but Chiara manages) Tiepolo Restoration Company, an art restoration firm, so Gabriel considers himself to work for his wife. As it should be.

Their peace and solitude are broken by the infamous Julian Isherwood, the London art dealer who comes calling and asks for Gabriel’s assistance on a possible fake and fraud investigation. As is common in the art world, a long-lost original from a famous painter has mysteriously surfaced, this art dealer sold it for a fantastic price, and there are beginning to be whispers about the possibility that the painting was a clever fake. The painting in question was The Portrait of an Unknown Woman by Sir Anthony van Dyck of The Netherlands.

A woman sends a letter regarding the painting to the art dealer after she heard of the sale; says she has legal and ethical concerns about that painting and would like to meet up to discuss it. Unfortunately, she is killed in a hit-and-run car accident before the lunch meeting can take place. Thus the plot is set up.

The thing I love about Daniel Silva novels is that one learns things. He simply cannot help himself; he does his research so well and jam-packs his books with information large and small, yet always fascinating. I learned about craquelure. That cracking, or desiccation pattern, you see in old paintings. Art experts not only see it, they can read it. In this passage I learned that craquelure is unique to the paint, the painter, and the time period in which the artist painted. Gabriel and his wife Chiara are looking at a computer screen, at a zoomed-in portion of the painting in question:

Gabriel asks, “What does the craquelure pattern look like to you?”

“And what does that tell you?”

“I will defer to your superior knowledge.”

“Surface cracks resembling tree bark are typical of Flemish paintings,” explained Gabriel. “Van Dyck was a Flemish painter, of course. But he worked with materials similar to those being used by his contemporaries in Holland.”

“So his surface cracks appear more Dutch than Flemish?”

“Correct. If you look at Lady Elizabeth Thimbelby and Her Sister on the website of the National Gallery, you’ll see what I mean.”

And I learned this was important, because looking at the fine details such as how oil paintings crack, was one way that art experts spot forgeries. Forgers have learned how to use chemical hardening agents to artificially age a painting, producing four centuries’ worth of craquelure in a matter of days. Yet it still cannot fool the trained eye.

I also learned from reading the book, and from his in-person interview, that up to 20% of the artwork we see in galleries and museums today that are attributed to famous artists are, indeed, forgeries. That is a shocking statistic. The book is a fascinating primer on how the art world works, how art is bought and sold, how it is used as a commodity by investors, and how forgers have moved into this market because of the enormous amounts of money that move around in it.

The cat-and-mouse game of figuring out who the forger is and unraveling their extravagant caper is great fun, and for once is free of Silva’s political intrigues. If the book lacks anything, I would say that now that Gabriel is truly retired, I was looking forward to a more fully fleshed out Chiara and their two children, and you don’t get that here. Chiara is still very much in the background, still very much the two-dimensional, adoring wife. Even though he states he is working for her in the beginning, it appears to be a false flag.

But this is a small criticism. For Daniel Silva fans out there and for those of you who are intrigued by the art world, especially its dark underbelly, you will enjoy this book.