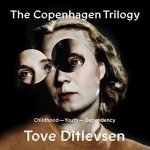 The New York Times Book Review editors were wildly enthusiastic about The Copenhagen Trilogy: Childhood; Youth; Dependency, and because I usually agree with their assessments, I dived in. But the deeper I got into this, I have to admit, the less I liked this author.

This is a series of three memoirs that were published separately in the 1960s and 70s in Denmark, and here are published together for the first time in English. The author had a deeply troubled childhood—her education was aborted at age 14 and her parents sent her out into the workforce to earn a living with no skills or guidance. She was laughed at by her mother for her desire to be a writer—a poet specifically—who told her that “everything in books is a lie.” It is remarkable that, even with such a scanty education, she gained notoriety as a poet even as a teenager.

Because of her estranged relationship with her mother, and the relationship her parents had, she had no positive role models in the area of healthy relationships. This had disastrous consequences for her own marital choices, as she seemed to jump from man to man, misinterpreting favors or sex for love. She married her first husband because he could publish her writings. But he was impotent, so she left him for her second husband because he would have sex with her. She left the second one for the third one because she became hooked on Demerol and, as he was a medical doctor, realized he’d be an easy supplier for her. In fact, she invented a chronic earache that was a lie, just to get him to continuously inject her so she could be stoned every day on the pain killer.

As I read this book, I came to very much dislike this person and her shallow, manipulative outlook on life. She eventually left the doctor and married a fourth time. She committed suicide about 5 years after the end of the third book in the series, where she swears she is getting clean of all her addictions.

Several times in the memoirs she says that “The only time I am truly happy is when I am writing.” Even though she published prolifically, it was not enough to sustain her.

This is a sad tale of a sad woman’s life. It is now required reading in Denmark public schools.