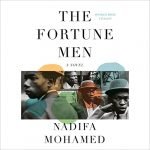 The Fortune Men was shortlisted for the 2021 Man Booker Prize, and is a novel based on a true story set in Cardiff, Wales in the 1950s. A young Somali sailor by the name of Mahmood Mattan is falsely accused of murdering a shopkeeper named Lily Volpert (her name is changed to Violet Volacki in the book). He is one of the last men in Britain to be sentenced to death; he was hanged in Cardiff Prison.

Nearly 50 years later, his surviving wife and children, who never gave up his cause, saw to it that his name was exonerated.

Mahmood was a small-time thief and a petty gambler, but no murderer. His biggest crime seemed to be that he had the audacity to marry a White woman. Being a Black man meant he already had a target on his back for every crime that needed a suspect, but marrying one of “ours,” a pretty one at that, added jealousy and spite to the mix.

The author takes us through his movements on the day of the crime: he visits the movies, stops by home, visits a prostitute (he and his wife have been estranged for a while). He goes nowhere near the shop in question, yet for some reason the police have zeroed in on him. They decide, from false witnesses who place him at the scene, that he is their man and arrest him.

The one person who could vouch for his whereabouts, the prostitute, he refuses to name. He doesn’t want his wife to find out, as he is hoping for a reunion. So his times of coming and going don’t quite add up, and the police, and eventually the jury, knew he was lying about something.

As I read through this story, it became a gut-wrenching exercise of wanting to yell out “Save yourself! Just say it! Tell the whole truth, it will mean the difference of life and death for you!!”

There were other lies the false witnesses told that also did not add up, did not make sense, but the police had their man and would not admit to faulty police work. Right until the very end, this book had me on pins and needles, and the inevitable end for Mahmood felt devastating. Being exonerated is a shallow victory when a young person has been robbed of their entire life.

Even knowing the outcome in advance, this was an excellent book to read not only about a heartbreaking miscarriage of justice, but also about how the legal system has improved in the decades since. This author is a magnificent storyteller and I will be reading more of her works.