Back when my cat Tigger was about 2 to 3 years old and still quite the hunter, one day she arrived on my back porch where I was doing laundry. I heard this “muffled meow” thing that cats do, the one through clenched teeth. “Oh no,” I thought, “she’s caught something again.” This happened almost on a weekly basis—on a good day I caught her in the act and could get her to drop her victim outside while it was still alive and was able to run off. On a bad day, I would come upon a pile of feathers or, the worst: a squirrel head, a squirrel tail, and nothing more. On this particular day, I looked down and hoped it wasn’t a mouse or a rat or worse yet, a bird. Since moving to Rockport, Texas, I had become an avid bird watcher, and so while I was tolerant (even encouraging) of Tigger decimating the local rat population, killing songbirds really upset me. Much to my dismay, she dropped a beautiful hummingbird at my feet. He was still alive—I could see his little heart racing away. I shooed Tigger away and picked up the precious little life, which still had enough energy to shriek at me in fear, and I tried to decide what to do.

Well, I was determined that if he was going to die, it wasn’t going to be at the hands of my cat. (I’m calling the bird “he,” although I really had no idea whether it was a male or female. I wasn’t that skilled at gender identification in hummingbirds yet.) I examined him carefully and couldn’t find any puncture wounds or any other obvious signs of damage that Tigger had inflicted—it seemed that she had managed to carry him between her teeth without actually biting down. She hadn’t plucked any feathers out yet either, something cats seem to love to do. Assuming it was only a matter of time before the hummingbird would die from injuries I couldn’t see, I found a quiet, protected place in the bushes of my landscaping and gently laid him there where he could pass away unmolested by my other cats and dogs and be at peace. 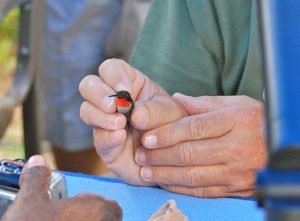 Hours passed. Early evening came and went; I made and ate dinner and watched the evening news, then walked my two Chihuahuas. Out of curiosity, I went out to check on the hummingbird to see if the inevitable had happened. Much to my surprise, he was still alive, albeit still panting quite heavily and heart still racing. Well! I thought, this little guy has a will to live! Then I thought back to the hummingbird festival I had attended in Rockport just weeks earlier, and the demonstration I had seen of how they “banded” hummingbirds, and how they handled and hand-fed the young ones and the injured ones. I thought I at least had to give this little bird a chance. I had mixed hummingbird food dozens of times before for my feeders, so I knew the proper ratio of water to sugar (4:1). I raced back into the house and made up a solution. Then I went out and gingerly picked up the bird, who screeched at me once again in fear, and I talked softly to it while I walked back to the house.

Remembering what I saw at the hummingbird demonstrations, I gently dipped the bird’s beak into the sugar water solution, and then lifted it out. Beak into the solution, lift it out. Beak in, lift out. I did that several times with no response. Then, all of a sudden, the bird arched his head back and I saw swallowing motions in his throat! My heart jumped for joy as I dipped his beak in again, and again he lifted his head back and swallowed. He was feeding! Soon, after about 10 times, the bird was able to alternate between dipping his head himself, and stretching out that amazing, long tongue he had into the dish of sugar water to reach the solution that way. I was so overjoyed that he was recovering and starting to feed himself!

However, he was still an exhausted little bird after the trauma he had been through. He would feed for a while, then appear to fall fast asleep. And I was becoming exhausted myself; by now it was close to midnight. I had a hummingbird upstairs in my bedroom who was clearly gaining strength, but not sure where to go from here, or how long the bird’s recovery would take. My hands were starting to cramp, with a bird in one hand and a dish of sugar water in the other—I was in a bit of a predicament! I didn’t dare put the bird down and run around looking for provisions for the night. I finally called up my boyfriend Steve and explained how I had just spent my evening, and asked if he would mind coming over and bringing some kind of box that I could put the bird in. Luckily, Steve was a fairly kindhearted guy because he came right over with a box and some towels, and was amazed at the scene he found at my house.

Once Steve got us situated, he quickly made for the exit. I could tell his thought process was going something like this: “I may be a nice guy, but this is a situation I don’t want to get roped into…” I laughed and sent him home. How many boyfriends want to babysit a hummingbird through the night? 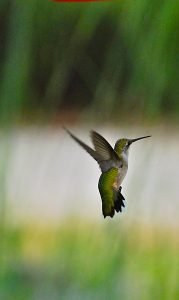 I let the bird fall back to sleep in the box, and put the dish of sugar water next to him, and put some leaves and grass in there—probably silly, but I wanted him to feel a bit at home. Then I put a screen on top of the box, just in case. At about 1 a.m. I finally turned out the lights and went to bed.

Not 15 minutes later, I hear Wham! Wham! I jolt awake and turn on the light: What was that?! Wham! I realize the hummingbird is trying to fly away! He’s fully restored and is flying up into the screen!

Aww, heck. I walked the box downstairs and outside to the back porch, took one last look at my little friend, and removed the screen from the top of the box. Zoo-o-om, away he flew, with that buzz that only hummingbirds can make as they slice through the air.

Be careful out there, little buddy.

I don’t think I’ll ever forget how amazing it felt to hold that tiny little life in my hands, which went from nearly lifeless, to slowly gaining strength, to managing life on his own terms once again.