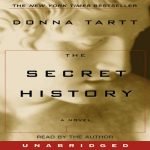 I first read Donna Tartt’s The Goldfinch, which I reviewed here. On the recommendation of a friend, I was told, “Now you’ve got to read her first novel, The Secret History. So I realize I’m late to the party on this one, but wow, was this a great book.

The novel is told from the perspective of Richard Papen, a middling student who moves from California to Vermont and gains entry to expensive Hampden College through a miracle of letters of recommendation, financial aid, and lies told on the application form. It’s the 1980s, so we are thrown back into the era of no cell phones, no Internet, lots of smoking, lots of drugs and drinking, lots of partying, and a little bit of studying. Richard has a troubled home life and getting away from his parents and moving across the country is worth almost any sacrifice asked of him. He’s ashamed enough of his background that he happily invents a new one.

He excelled in Greek during his first two years of community college in California as a pre-med major, but couldn’t take the biology classes, so had switched to an English literature major without telling his parents. Now that he’s at Hampden College, he’s trying to sign up for Greek again. There is only one problem: the only Classics professor who teaches Greek, Julian Morrow, takes on only a few students each year, and when he does, he expects 100% devotion to the study of Greek. In other words, drop all your other classes and study only under him. Kind of like being a graduate student, only you’re not. You’re still an undergraduate, being expected to specialize way before your time.

After Richard’s interview with Julian, when he learns the requirements, he agrees to this bizarre set of conditions and drops all his other classes. He shows up for his first day of class and meets the other few students that he’ll be studying with for the next year: Henry, Francis, Charles and Camilla (who are twins), and a guy whose nickname is Bunny. This gang of six friends are the core of the novel, as they slowly include Richard in on their inner circle and entrust him with their secrets. With Julian as their ringleader, they form an elitist bubble operating on the edge of campus life where their self-proclaimed brilliance allows them to hover above the rest of the student body.

The book opens with a dead body discovered in a frozen bank of snow, and we slowly learn that the five other students in Greek class were responsible for the death. As Richard learns what happened on that fateful and tragic night, even though it happened before he arrived at Hampden, he becomes part of the after-the-fact coverup. They have now become his friends and he’s invested in the belief that it was a tragic accident that they shouldn’t have to spend the rest of their lives in prison for.

This book is a wonderful reminder of how impossibly close we became to our college friends, how intertwined our lives became, and how we would do anything for those friends, even when they crossed lines that should not be crossed. Each of these characters are so well drawn that I felt I knew each one of them, or someone just like them. When another murder takes place late in the novel, by then the die is cast, all justifications are made, everything is black and white. It seems like the logical thing to do.

I truly could not walk away from this book. I hope you like it as much as I did.