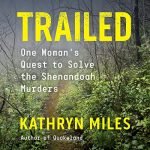 Just released on May 3, 2022, I’ve blasted through Trailed: One Woman’s Quest to Solve the Shenandoah Murders within 5 days of its release date. This is a true account of two female backpackers who were murdered in Virginia’s Shenandoah National Park in May 1996. They were there for a week-long backcountry camping and hiking trip, along with Lollie’s dog, Taj, but never returned home. Because of my own decades of hiking and backpacking in national parks and national wilderness areas, with groups such as the Sierra Club, as a couple with husband and/or boyfriends, and even solo, I was irresistibly drawn to this book, horrified that such a thing could happen.

Lollie Winans and Julie Williams, both in their 20s, were two skilled backcountry women who led other women on outdoors adventures. They had met the previous summer in an outdoors program called Woodswomen, Inc. that trained and prepared women for the out-of-doors, and became skilled leaders. They also had fallen in love, but in 1995, that was the kind of thing to be kept under wraps.

In the final days of this week-long camping trip at Shenandoah, they chose an abandoned, obscure trail that had fallen into disuse to make their campsite. Somehow, their killer followed them there or knew of their plans. That part of the story still remains a mystery as the author painstakingly retraced their final days.

When they did not return home from this trip, a few days later a search began. Then, unsettlingly, a friendly, tan-colored lab showed up at one of the ranger’s stations that didn’t seem to belong to anyone. The authorities thought it might be the girls’ dog. The dog was wary about getting into the ranger’s car until they called the name “Taj,” then then the lab jumped right in. When they later found the girls’ car and the dog ran right up to it and peered into the passenger side window, they realize they may have a big problem. Why is this dog separated from its owners?

With great difficulty (because of the remoteness of their campsite), they finally discovered the girls’ tent and found a gruesome scene: a slashed tent, and both women zipped inside their sleeping bags, brutally murdered.

What happens after that is a sad tale of coverup on the part of the National Park Service, to preserve the reputation of the parks as a safe place for the public to go, and a rush to convict someone on the part of the FBI (because this occurred on federal land) who was not guilty and was not even in the park that day. The park’s reluctance to release the news about the event, so that other hikers could be warned and make their own decisions about whether to stay in the area or leave, was outrageous.

Darrell Rice was eventually charged with the death of these two women, with then-Attorney General John Ashcroft calling the case the country’s first-ever federal hate crime death penalty case in 2002. However, 2 years later, all charges against Mr. Rice were suspended without prejudice, meaning the government could recharge him at any time if they felt they had enough evidence to bring a new case against him. So his life became (and is) a living hell. Meanwhile, they are not looking for any other killer.

Kathryn Miles, the author, is an award-winning journalist who wrote for Outside Magazine, having “carved out a niche for myself as a journalist covering backpacking on our nation’s long and scenic trails.” 20 years after the tragic event, after hearing a public appeal from the FBI for leads on this case, she proposed a long-form story to her editors at Outside regarding the murder of these two girls, and got their approval. The subsequent investigation became an obsession and a story larger than a magazine article, and hence this book was written.

She uncovered many investigative errors on the part of the FBI, the park service’s handling of the crime scene, DNA testing (or lack thereof), conflicting evidence, conflicting timelines, and reluctance on the part of the FBI and the park service to follow up on other credible leads besides Darrell Rice. Meanwhile, a serial killer is still on the loose and no one has been held accountable for these and many other murders in our national parks.

Her investigative work is exhaustive, tenacious, and impressive, comparing and contrasting with other similar crimes. Yet this book reads like a page-turning novel and is not dry or formulaic at any stage. She has a thorough command of the subject matter and her skilled writing makes even forensic science seem understandable.

To know that this has gone on in some of our nation’s most sacred places, and to know of the apathy and reluctance on the part of the National Park Service to protect the public from these violent predators was devastating for me to read. I will not enter a park again with such a lightness of heart and sense of peace ever again.

This is an important book to read, even just for the reminder that we all need to never let our guard down.