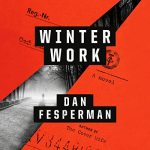 Winter Work is a mesmerizing mix of fact and fiction, and as a reader you have the fun of trying to figure out which is which. Just a few months after the Berlin Wall came down in early 1990, the East German Stasi, their foreign intelligence service, was frantically destroying evidence. The Stasi started shredding documents as fast as they could, as well as shipping off the most sensitive documents to companion agencies such as the KGB. The CIA was just as frantically trying to learn as many of the enemy’s secrets as possible before they all got destroyed.

Then the Stasi started to think about self-preservation. Their early years of loyalty and devotion to the East German regime turned into eventual disillusionment on its failure to deliver on all the promises of the regime, the emptiness of the slogans, and the willingness of the Stasi to interfere with everyone’s lives. The numbers of paid informants who basically ratted out their friends and neighbors were staggering.

The US President at the time, George H. W. Bush, was watching protestors on TV in East Germany throw documents out the windows of a Stasi office, and casually remarked, “I hope we’re getting some of that.” Our CIA leaped to attention, sent top officials to Berlin, and said, “How can we get our hands on some of this before it all gets destroyed?” (This really happened.) The CIA also got their hands on a directory with the home phone numbers of these Stasi foreign intelligence people, and they started cold calling them. “Hey, want to share your secrets with us? We’ll pay you.” (This really happened too.) When they got nothing but hangups and cursed at, they tried another tactic. They went door to door, like the Fuller Brush man. (And this.) This is where the real-life records go cold, and where the author’s imagination was allowed to flourish.

Emil Grimm, a high-ranking Stasi officer who has just lost his job and has been locked out of his office, has taken refuge in the woods in his country cottage known as a dacha. As he is taking his morning walk through the woods, he comes upon a disturbing scene: the dead body of a Stasi officer, a colleague of his, and surrounded already, not by police, but by Stasi investigators, who should be just as “out of business” as he is. Worse yet, Lothar Fischer, the dead officer, was involved with Emil in a last-ditch secret operation involving the West. Emil now realizes he is on his own to finish out the operation that was meant to secure a future for him, his disabled wife, and their live-in caretaker. Because of Lothar’s death, which was made to look like a suicide but he doesn’t believe it’s true, he fears their plans may have been compromised.

Claire Saylor, a CIA agent from a previous novel of the author’s (The Cover Wife), is sent to Berlin to make contact with their agent Lothar, not realizing he’s been murdered. Emil must try to make contact with her, let her know that their deal is still on, and rebuild the trust that was lost when Lothar was lost.

If you enjoy novels with covert operations, state secrets, fascinating plot twists, and interesting characters interwoven with true-life historical moments, you will enjoy this book. A highlight of the book is actually reading the Acknowledgments, where the author details which events, people, places, and conversations were taken from real life and which were a product of his imagination, in case you didn’t figure those out for yourself. Fesperman does such a clever job of weaving fact and fiction together, that especially for those of you who listen to the audio version, it will be a challenge to keep the two separated.