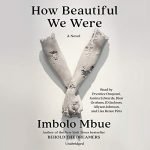 How Beautiful We Were: A Novel was listed as one of the 10 best books of 2021 by the New York Times Book Review editors. Set in a fictional village in Africa named Kosawa, it opens in October 1980 at a community meeting between three representatives of the American oil company Pexton and the villagers. Leaking pipelines and irresponsible drilling practices have poisoned the village’s land and water supplies; their river now runs green and murky. Their children are dying. They want the company gone and their land and water restored. The company reps say they are doing all they can, but the villagers feel like it’s a lie. Pexton is occupying their land at the behest of their dictatorship government and they have bought off the village leader, whom they no longer trust.

At the end of the meeting, Konga, the village madman, bursts up to the front and proposes a new solution: Let’s kidnap these three representatives from Pexton until we get what we want. He has somehow gotten his hands on the car keys from the reps’ driver, menacingly dangling them in front of the crowd. He refuses to give them back, and the reps can’t get back to the city without them. Because he’s a madman and their superstitions are such that you can’t touch a madman without becoming one yourself, none of the villagers will intervene to help, even when ordered to. A standoff ensues.

Thus jumpstarts a David and Goliath story of a tiny village of benign and powerless people up against an American oil company and an all-powerful government, both driven by greed. This story was less about the technical aspects of the how and what of oil spills and irresponsible containment, and more about the heartbreaking exploitation of uneducated people for their natural resources. About making promises and signing contracts with no intention of keeping them.

The village puts their hopes in one bright young girl, Thula, who makes her way to America for a college education, then returns home with all that she learned to continue the fight from the inside—a job in the government. Even at an early age, Thula had a band of followers, and after she returned, they became a quietly organized resistance movement determined to overthrow their crippling government.