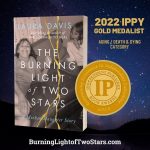 I’m a member of a Facebook group that focuses on memoir writing, and this author, Laura Davis, is a regular contributor. I’ve seen her post helpful comments to other writers on occasion, and I’ve come to learn that she has been teaching the craft of writing for a living her entire adult life. I recently attended an online workshop that she and another memoir writer held called “Family Matters,” which had to do with the difficult topic of writing about family, and naming names—should you, or shouldn’t you? What are the risks, the legal ramifications, could you get sued, how do you protect yourself and your family’s privacy? It was a fascinating seminar.

[Note: Shortly after writing this review, the author learned that she won a gold medal for this book in the 2022 Independent Publisher’s Book Awards, in the Aging/Death & Dying Category! This is a huge accomplishment in the world of authors who self-publish their works, and we congratulate Laura!]

[The remainder of this post has affiliate links, meaning I earn a small commission if you make purchases from these links. There is no additional cost to you.]

After attending this seminar, I decided to listen to this author’s most recent book, The Burning Light of Two Stars: A Mother-Daughter Story. Not because I related to the issue of coming out as a lesbian to my mother and her rejecting me; I’m not, and I haven’t. Nor because I’d been sexually abused by someone in my family and she didn’t believe me; I wasn’t. But because I saw that this woman, who displayed such incredible strength and wisdom in this seminar, had really been through some hell in her life and came out alive on the other side, to become a vital and productive member of society. And I wanted to hear how she did it.

The book opens with a fascinating in-utero growth and birth sequence of Laura and her twin sister, Vicki, who survives for only 24 hours. It’s a touching and imaginative passage that I’ve never read an author tackle before. Vicki, who had no funeral or a grave, is never forgotten throughout the course of the book.

Laura grew up in a Jewish household in the northeast United States: raised in New Jersey and making frequent trips to Manhattan to visit her grandparents on her mother’s side. She had only one older brother, Paul.

These frequent visits to the grandparents, as described by Laura, raised the hair on the back of my neck and at one point, an audible outburst. That they weren’t huge red flags in this family is anyone’s guess. The grandfather, Poppa, seemed to have excessive privileges that went well beyond the norm. During overnight stays, it was Poppa who tucked Laura in at night and told her a story. “That’s not right,” I thought.

Then, even worse, he took some kind of sick pleasure in expecting the young girls to lift their shirts so that he could inspect their budding breasts! This was all a hilarious joke to any relative who happened to be in the room, and obviously humiliating to the teenage girl. The year that Laura grew to a triple-D and she was still only 14, she was understandably self-conscious enough. When she and her mother arrived at the grandparents for a visit and the request for a “reveal” came, she refused. Her mother actually got annoyed with her and tried to shame her into it: “What’s the big deal? Do you have to be so unpleasant? We all did it.” For the first time ever, Laura said no and didn’t give in to the pressure.

That her own mother would try to pressure her into something like this was unjustifiable under any circumstances. That her own mother didn’t see this as a red flag of her father’s behavior, that there might be more underneath the surface, is also inconceivable to me. My outrage was boiling as I continued to listen to the book.

About a year after her mother, father, and Laura (at 13!) attended Woodstock together in upstate New York, her father abandoned the family and “became a hippie.” He had just dropped brother Paul off at the University of Colorado, and decided he wasn’t coming home. He wrote Laura a letter of explanation and apology, stating he would always be her father, but that he would not be returning.

This abandonment meant Laura’s mom Temme was on her own to provide for her, pay all the bills, and raise a teenage girl, managing all those raging hormones. Any normal mother-daughter dynamic happening during the teenage years would have been only magnified by the stresses of being abandoned by your husband and father, and your only brother gone off to college. No one else in the household was there for a buffer.

Paul didn’t last long at university. He dropped out of college to follow a 13-year-old Indian spiritual master and moved to Delhi, India. Laura became intrigued with Paul’s belief system and attended a few seminars and meditation sessions. As soon as Laura graduated from high school, she followed her brother’s path and joined the same Indian spiritual master, living in his ashram in San Antonio, Texas until she was 21 years old. She eventually left, stating, “I’d been happy there, but the rules and constraints that had once protected me started to chafe.” Looking back on her time there, she realized she was a “A daughter desperate to escape a controlling mother. An incest survivor who…. needed a safe place to live where sex wasn’t a constant casual proposition.”

I’ve had a similar experience with a different group of people, only I stayed for 11 years. I related to the need to feel a part of a group and be accepted. But when you start to think for yourself or start to question anything, the shunning is real and can be devastating. Leaving is extremely difficult when your entire identity is tied up in their belief system.

Laura’s sexual abuse by her grandfather started when she was 3 years old—during those nights of “tucking her in.” The events were so traumatic that she repressed the memories until young adulthood, when they came bursting forth during a different intimate encounter. With the help of years of therapy, she was able to finally discuss it with her father, who was supportive, and with her mother, who was not.

Laura’s estrangement from her mother took its first big hit at 23 years old, when she came out to her as lesbian. But the second blow was when she finally confided to her mother that she’d been the victim of sexual abuse—and that the perpetrator was Poppa. Her mother was the picture of caring and support, until she heard the name. Then a switch flipped. In other circumstances, I think we’ve all seen that happen. This revelation to her mother, and Laura going public with it by publishing the book The Courage To Heal, caused a years-long estrangement between them.

This current book is the book of reconciliation, recounting the time period when her mother moves 3,000 miles from New Jersey to California to be near Laura for the final years of her life. Laura becomes her final caregiver. It was an off-the-cuff invitation Laura had made to her 10 years earlier (“Move to California! When you’re old! I’ll take care of you!”), never dreaming she would take her up on it. Now, with no warning, she was on her way.

Brother Paul, who had returned to the States, still retained his New-Age belief system and remained at least a thousand miles away from Laura and her mom, thus leaving the huge burden of care on Laura’s shoulders.

The shaky peace that was maintained at 3,000 miles away comes crashing down as they try to live in the same town, as Temme demands more and more of Laura, and as her health gradually diminishes. At one point as I’m listening to the audiobook (which the author herself narrates), Laura and her mother are in the car, and they get into a fight. And I have to stop what I’m doing and just listen. It was like I was in the car with them—the emotions were so raw and so real. They say terrible things to each other. I’ve had that fight; I’ve felt those emotions.

At the risk of quoting the entire book, I’ll leave it there. The skillful writing of this memoir reads like a best-selling novel. So well told from beginning to end, it is the real thing. Please read this book.

If you have a comment on this review, or if you’ve read this book, please leave a comment in the Comments section below!